There was a knock at the door to my room in the hospital which woke me up. It was mid afternoon, and I was enjoying my second daytime sleep.

A nurse stepped in.

‘Mikey. We know you love nursing and you want to go back to it. But after your accident, the haemorrhages and haematomas on your brain were so severe that regaining any type of employment will be difficult. I think you should consider another job, nursing is no longer realistic’

I remember these words vividly. They were said to me only days after I had come out of my amnesia following my accident.

Each week of every month of every year since, someone or something has told me I can’t be a nurse and done everything to make it impossible for me.

The nightmares, the terrifying experiences I’ve lived, the physical pain I live with daily, the betrayal of those around me, the isolation, the depression, the anxiety, the headaches I experience every single day, the vertigo feeling and having the ground sway underneath me every day at work, the sickness that follows and everything else I experience every day will always remain.

I can see why I’ve been told I could never be a qualified nurse. I don’t have anger towards anyone who’s told me I can’t do it

Last week, I met with my neurologist. He’s been there since the beginning, when I was standing on my hospital bed and throwing blankets over nurses during my state of traumatic amnesia because I thought I’d been captured and locked up in a prison.

A lecturer told me the same thing after the fitness to practice panel last year. ‘We really didn’t think you’d get this far’ she’d said.

This blog isn’t an ego trip. It is a truth trip. I’m a truth seeker and exposer. That’s all.

My next placement might discriminate against me, most have up until now (aside from a few). But remember this:

On the placement in summer they all knew about my condition and symptoms. They said they saw them everyday and had concerns. But I knew this was false.

Yesterday, I told my mentor on another unit about my brain injury after having worked with her for four months (Nobody on this unit had known about my injury including her). I was sent to this unit to see if the concerns were really true.

My mentor told me she nor any other staff members had not witnessed any type of symptom of any sort.

The only other ward that I didn’t tell my about injury last year said the same thing, having giving me all A*s and As. 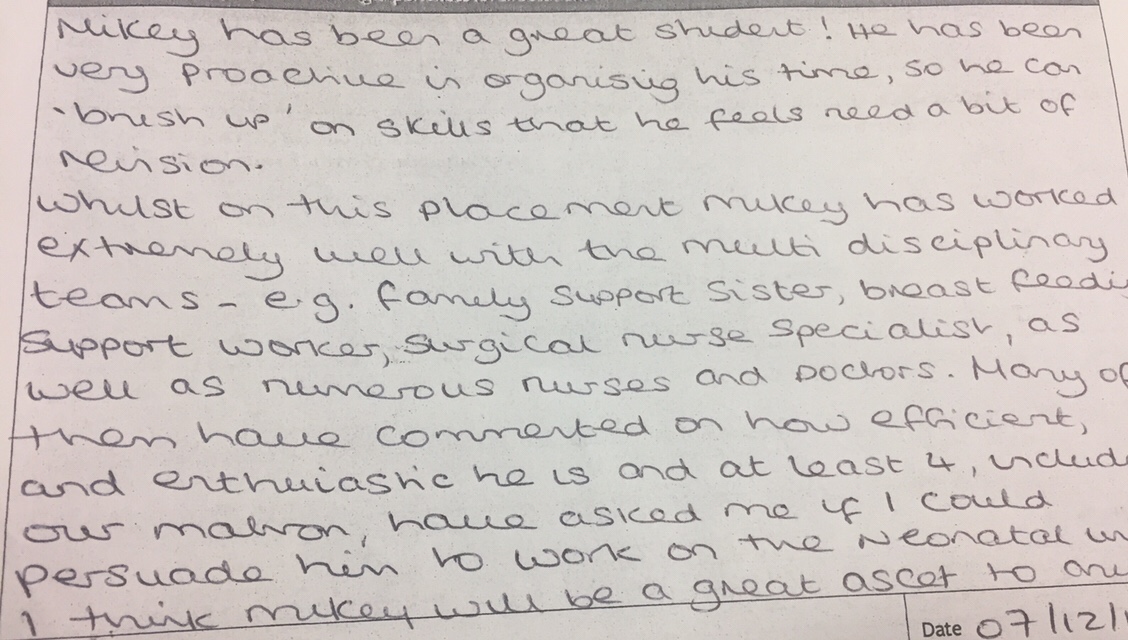 People have doubted me and discriminated against me from day one. Hopefully I’ve shown these ‘doubts’ to be false now.

Next month I start my final nursing placement after 7 years of not giving up, of fighting daily discrimination battles and completing three years of academic degree- level work. Doubt me now.